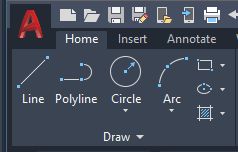 Getting over the initial hump with AutoLISP

Up to now, Python has been my only programming language. Now there's AutoLisp. Once I discovered LISP routines in AutoCAD, I wanted to learn how to write and debug them. Until recently, there was no practical tangible reason for me to do that, so I didn't. Now that has changed, and I can't say I'm unhappy about it.

So I've set about getting over the hump that seems to always stand between me and a progressing cogitive chain. The first link always seem to be the hardest to forge. Once its ends are joined, though, subsequent links seem to come with increasing rapidity, which brings me joy.

I want to share that joy with anyone who might get some benefit, so I'm planning to document my progress as I go. The act of documenting helps my learning, and provides me with notes to look back on. Plus maybe someone else can glean some insight from this work.

I'm going to start by selecting two points in model space, and then instruct AutoCAD to draw a rectangle using those points. Let's get started, shall we?

AutoLISP is made for AutoCAD

To understand AutoLISP, one has to have some understanding of AutoCAD. Like, for instance, points are not a single entity, but are made up of three numbers, each representing either x, y or z.

In spite of the fact we work in 2D most of the time, AutoCAD is a 3D modeling tool. (Albeit a rudimentary one.) 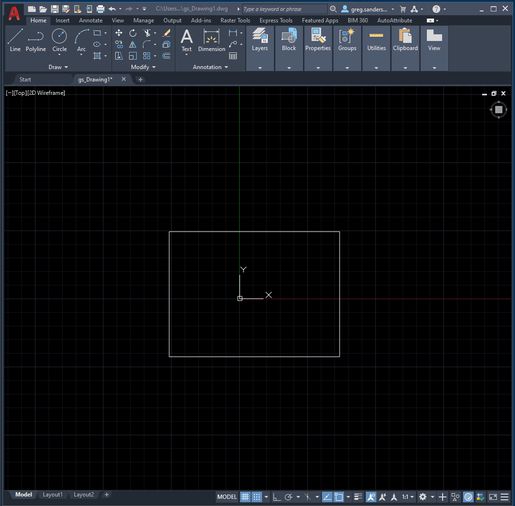 Image: This may look simple, but it takes some work to get there.

The above screenshot shows the end result of the LISP routine listed below. You might be inclined to think "y" is pointed up. That's normal.

You need to think of this 2D image as being a picnic blanket lying on the ground. You are standing above it looking down. "x" goes left and right, "y" heads off to the far horizon in front and behind you. Get it? Good.

A Few Comments About Lisp

This codeblock (below) is a complete AutoLisp program. If you load it into a running instance of AutoCAD and issue the command WORKWITHLISTS, you will be prompted to click first on one corner then the other to make a rectangle (window selection) with the cursor. When you finish, AutoCAD will draw lines creating the same rectangle on the screen.

More important, you will get this printout on the console: 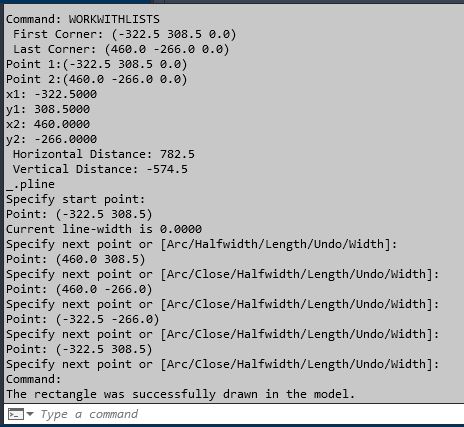 Image: If you code it right, the console can help you learn this stuff.

So, the four corners of the box are handed to the '_.pline' command looking like this:

You may wonder where the "z" coordinate is. Good eye! When the third value in the list is left out, the LISP interpreter assumes the value is '0'.

There is a ton of information in this little block of code. I've written in information on each function so you can get a clue about what they do. Copy this block out to a text editor so you can see it without having to scroll back and forth. Try to absorb it.

Microsoft's Visual Studio Code can be used as your editor if you like. AutoCAD 2021 and newer have VSCode plugins that interface AutoCAD with VSCode for debugging. It works great.

This info is available in a lot of places, but I don't always immediately understand what I'm reading. This is my interpretation of what I've gathered written the way I'd say it. Hopefully it makes sense to you.

Well, that's it! The first link is forged, and now I have a Thing That Works!